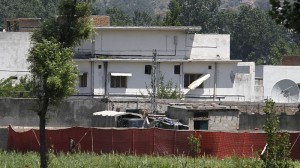 A Pakistani soldier stands near a compound where it is believed al-Qaida leader Osama bin Laden lived in Abbottabad, Pakistan on Monday, May 2, 2011. Bin Laden, the glowering mastermind behind the Sept. 11, 2001, terror attacks that killed thousands of people was slain in his luxury hideout in Pakistan early Monday in a firefight with U.S. forces, ending a manhunt that spanned a frustrating decade.(AP Photo/Anjum Naveed)